From Non-diver to Shark Identifier.

We first met Steve Tapply in 2007 when he visited Malapascua, never intending to dive. But he decided to give it a try and booked an afternoon’s Discover Scuba Diving experience. He was immediately hooked and went on to complete his full PADI Open Water Course. He left the island a few weeks later with several certifications to his name and a lot more dives under his belt!

He has been back several times since, most recently to complete his 500th dive on our famous thresher shark dive specifically with our star DM Tata, and must have logged well over 100 dives with us on Malapascua! On his most recent visit, despite having done so many shark dives before, he decided to take TSD’s unique Thresher Shark Specialty Course. Here is what he had to say…

Monad Shoal. 5.45am. I’m knelt on the sand at 26m, watching yet another thresher shark pass by, just metres away.

It (I’ve no idea if it’s male or female) is sleek, impossibly graceful, and not the least bit intimidating. It turns away and comes back, apparently not intimidated by us, either. A couple of minutes later there’s another. And another. After a fifty minute dive, we do our two safety stops, and then surface.

I pass my dive gear up to Ondo and climb back onto Rosie, a little concerned that if I smile any more, my jaw is going to drop off. The group who went down on air is already back on the boat, and their faces tell the same story. Because we had about eighteen sightings, including three at once. (Or we saw the same three thresher sharks several times.) Jerry hands me a coffee and I sit with two of the Divemaster interns.

On the way back to the island they inform me that there were at least six different individuals, including two adult females, an adult male and a juvenile male. How do they know? It turns out they did the PADI Thresher Shark Specialty, written by Andrea (the owner of Thresher Shark Divers), and only available at TSD. Intrigued, I check out the details on the website, and sign up. 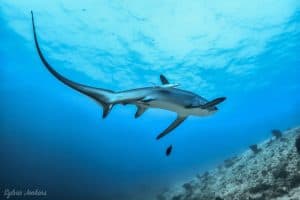 The specialty consists of two academic presentations, followed by two dives at Monad Shoal. The first presentation is on sharks in general, including some I’d never heard of, but since there are over 400 species of sharks, that’s not surprising. It starts with their classification and evolution, and then looks in considerable depth at their biology and anatomy.

Some of the highlights: You discover that sharks actually do have a ‘sixth sense’. (Cue Bruce Willis joke which you didn’t see coming…) That they can replace their teeth many times during their lifetime. That instead of a swim bladder, they have a huge liver filled with squalene (sadly shark liver oil is highly prized by the cosmetic industry). You also study their social behaviour and reproduction, and learn that females have much thicker skin than males because of the males’ aggressive mating habits. Then there’s a section on Human interactions and Conservation – all three species of Thresher shark are listed as ‘vulnerable’ – humans are a much greater threat to sharks than they are to us.

Angus has now taught this course more than 100 times, but does it engagingly and with enthusiasm. And if you think that ‘presentation’ means passive, you’d be wrong. It seemed like every new photo, slide, chart or video was accompanied by questions designed to help me apply the knowledge and understanding I’d developed as the session progressed. Of course there’s also the ubiquitous PADI knowledge review…

The second presentation focuses specifically on the Pelagic Thresher sharks (that’s the species we see here at Malapascua) – their anatomy, behaviour, feeding habits… Then Monad Shoal – why the sharks are here, how to find and interact with them, how to determine gender, categorize movement patterns etc.

For both sessions, TSD have put together a really comprehensive selection of photos and videos. Particularly memorable in the first session were films of the mating behaviour of different sharks (including one of two leopard sharks who completely ignored the several divers filming them only metres away). For the second session, there were also videos of thresher sharks feeding (using their tail as a whip!), cruising around, and breaching (where they’re trying to remove parasites that have become lodged in their denticles – the overlapping plates which make up their skin). 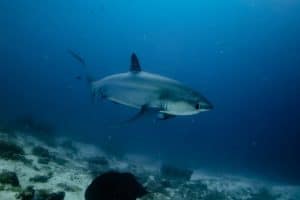 And so after learning all about them, we went out to see if we could find some thresher sharks. It would not be an exaggeration to say that the understanding you develop in the two classroom sessions transforms the dive.

As we dropped over the ledge, an adult cruised past, ignoring us. I signaled to Angus that I thought it was a male – he agreed. We moved to the cleaning station known as the ‘W’, where an adult female, not being cleaned, came quite close to check us out, then disappeared back into the blue. There were very few wrasse above the ‘W’, so we moved on to the next cleaning station, to be greeted by another adult female, this time being cleaned by wrasse around the face and genitals.

When it left, we moved back to the ‘W’. A female appeared over the lip, being followed by a male, then turned back. We rose up to the edge, peered over and watched them. Then there was another male to my right, at my level, and an unidentified adult to our left, several metres deeper. 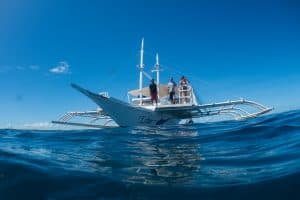 Back on the boat, we were both ecstatic. This is my fifth visit to Malapascua, so I’ve seen the thresher sharks many times. But while this wasn’t my most successful dive in terms of the number of sightings, it had to be the most rewarding – being able to actually identify the sharks, look for identifying or significant features, and assess their behaviour.

I dived Monad shoal several times before the second specialty dive, trying to put into practice what I’d learned. On one dive there was an adult female with what looked like fresh scars on her caudal (tail) fin – possibly an indication that the thresher sharks were mating. (Since they spend most of their time much deeper than we can dive, no one has actually seen their mating behaviour). I also saw three different males, each with very distinctive dorsal fins, two of them closely following adult females, and knew that if I saw them again, I would be able to recognize them.

For the second specialty dive, the student is required to come up with a plan for the dive, and then actually lead it. Since one of the Dive Master Trainees was also completing the specialty, we came up with a plan between us, and briefed Angus. Then we went out to Monad again. While we didn’t have as many sightings on the second specialty dive, we were able to identify that two of the Thresher sharks were adult males, and accurately categorized the movement patterns of each shark we did see. Back on the boat, Angus debriefed us. He was happy with our plan, our observations and application of what we’d learned, and, quite rightly, pointed out a couple of things we could have done better. 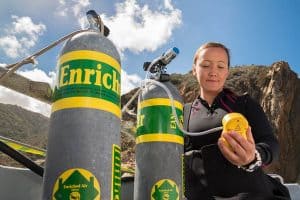 And as an afterthought – it makes so much sense to dive Monad Shoal on Nitrox. If there was a group diving on air, they’d always drop into the water after we did, and would invariably be back on the boat, dry and drinking their coffee, when we surfaced. And the increase in bottom time means that the PADI Nitrox course pays for itself in a very short period.

In the past seven years diving, TSD are, for me, the best organised, the most professional, with the nicest atmosphere, of any operation I’ve dived with. So it was logical that I come back to do my 500th dive with them. I wasn’t planning on doing any more courses. Now I’m really glad I did.