Shark diving with the Thresher Sharks of Malapascua 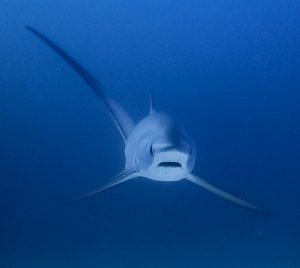 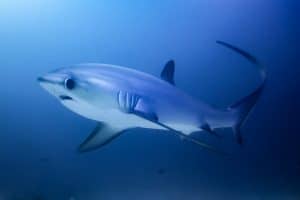 Malapascua is the only place in the world where you can dive with the magnificent thresher sharks every day, so come and see these amazing creatures in action!

You are very lucky – there has never been a better time to come for thresher sharks! TSD has been diving a new site and the sightings have been amazing, the best since we first arrived in 2003!  And sightings are now excellent year-round.

We have a very special spot where we dive for threshers and we believe it is the best shark experience you will get on Malapascua! Let me tell you why!

The thresher shark, or Alopias pelagicus is a type of mackerel shark or Lamniformes. In German it is known as Der Gemeine Fuchshai, or fox shark. The threshers grow up to a length of 5-6 meters, about half of which is the huge scythe-like tail for which it is named.

Thresher sharks normally live in deep water and are nocturnal (night creatures), so are not often seen by divers. Although they can be seen occasionally in other locations, we know of nowhere else they can be seen so regularly. They have very small, sharp teeth and very big eyes to see in the dark. They eat squid and schooling fish such as herring and mackerel and they use their tails to “corral” the fish into denser schools. The tail may also be used to stun the fish. They will sometimes “breach” and can jump completely out of the water.

Sadly, like most other shark species, the number of thresher sharks in the world is declining due to over fishing for their fins and meat. Monad Shoal has recently been made a marine park to help protect these creatures.

BOOK YOUR DIVES ONLINE
Scroll down for more details!

You can find some more amazing videos on YouTube

Monad Shoal is a sunken island at 16-32m. Thresher sharks live in deeper parts, but  in the early morning, before it gets too light, they come up to the Shoal, attracted by its cleaning stations.

Due to the dive sites unique square dive profile, you will spend the majority of your time 22-26m of depth.

We advise diving enriched air nitrox on this course to extend your bottom time.

What time do we dive?

We have found that the best time to dive with the sharks is anywhere between sunrise and 9am, but usually we go early to have a better chance to see a lot of them!

Why are they here? 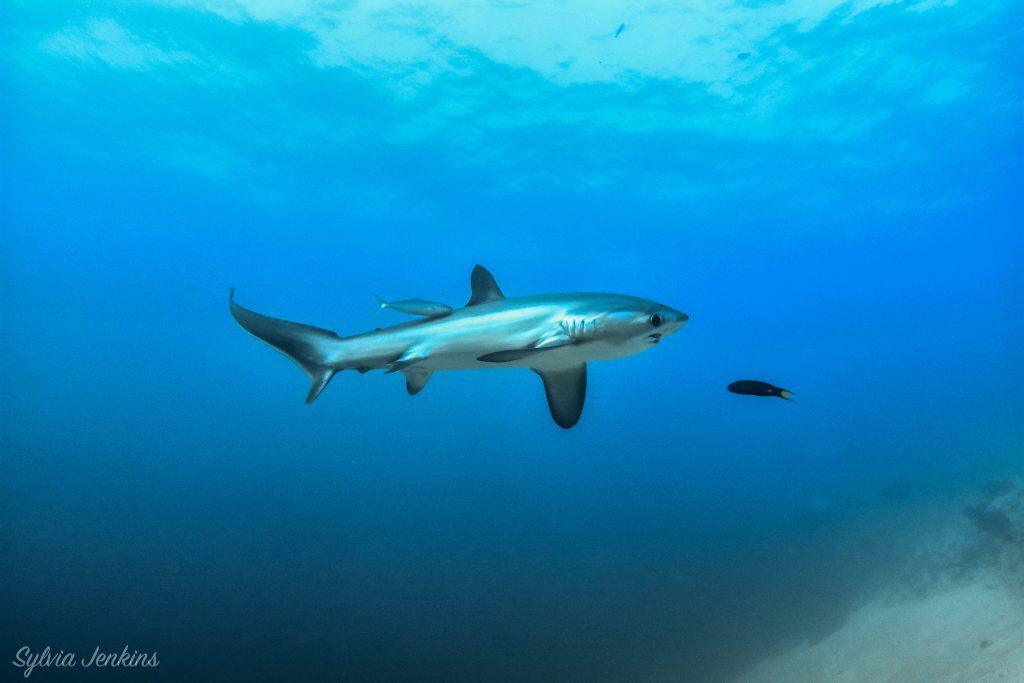 The thresher sharks live and hunt in deep water for most of the day, but in the early morning, before it gets too light, they come up to the Shoal, attracted by its cleaning stations.

Here they have a symbiotic (mutually beneficial) relationship with the small fish called cleaning wrasse which eat dead skin and bacteria from the shark’s body, its gills, and even inside its mouth.

You can see two cleaner wrasse ‘servicing’ a thresher shark in the photo on the left.

Because the cleaning benefits these huge animals, the sharks would never think of eating the wrasse as an early morning snack. The cleaning stations are like a car wash for fish.

Diving with Thresher Sharks on Malapascua

The sharks are not dangerous to humans and will swim over the side of the shoal if startled. Threshers like to circle, sometimes in twos and threes, so if we see a shark as it is swimming away, it is likely the shark(s) will soon come back into view. On our dives, we move slowly, and if we see a shark, we stop and wait. If we stay still and make no sudden movements, sometimes the sharks can come so close you could almost touch them. We never swim after the sharks or use camera strobes as this will scare them away.

Monad Shoal is an advanced dive site, so if you are Open Water certified you will be required to go with an instructor. Depending on your previous experience you may be required to do a checkout dive. Please contact us for more details.

Please note: camera strobes and flashes are not allowed. 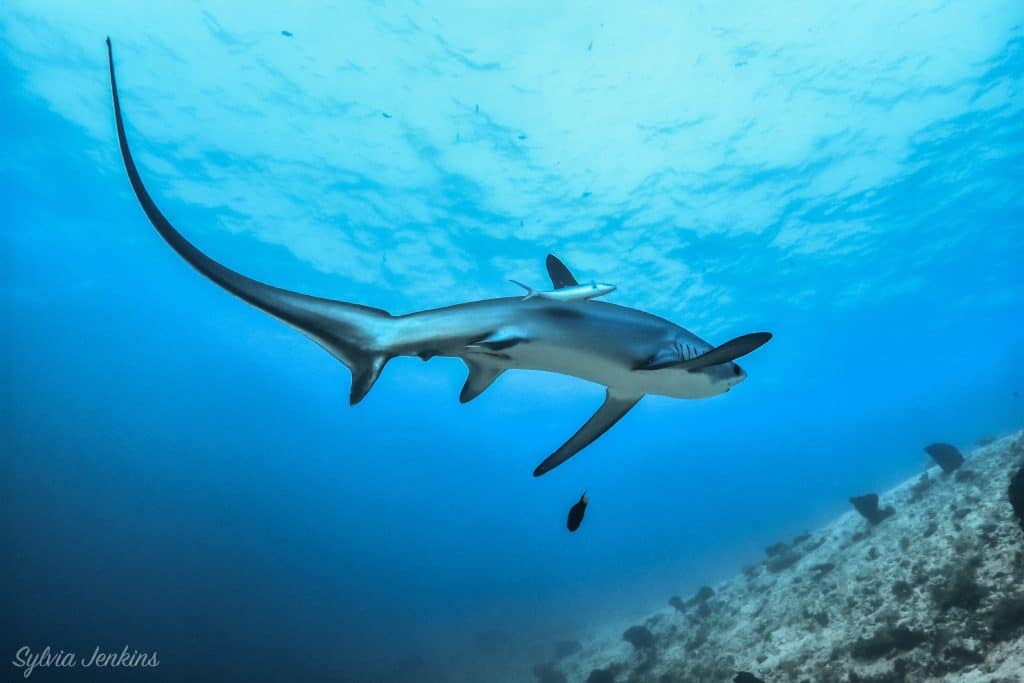 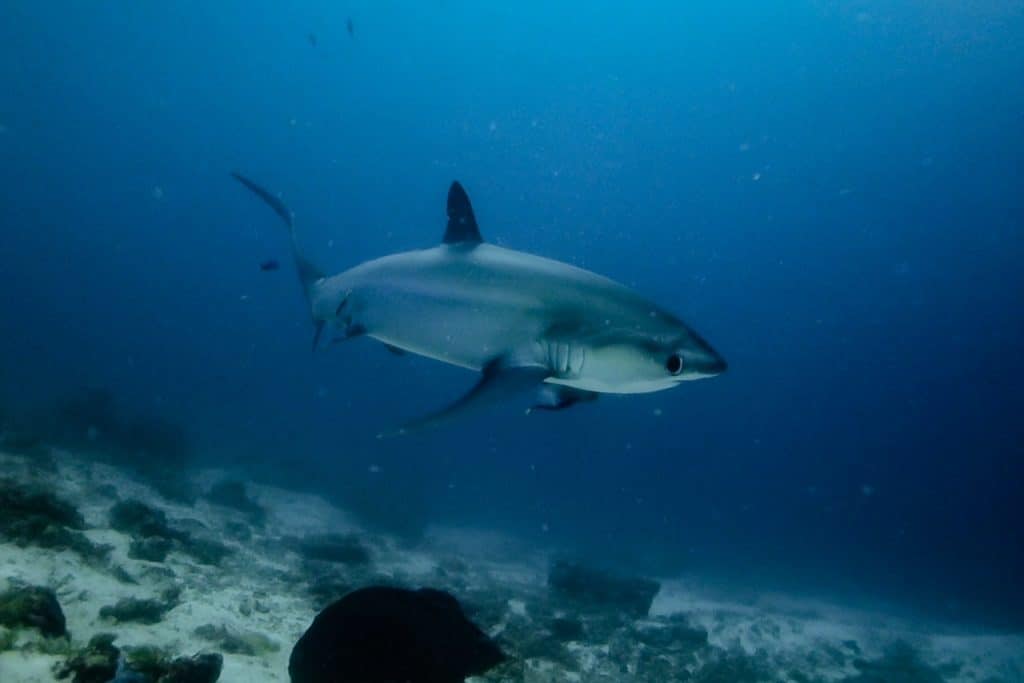 What is the best time to dive? 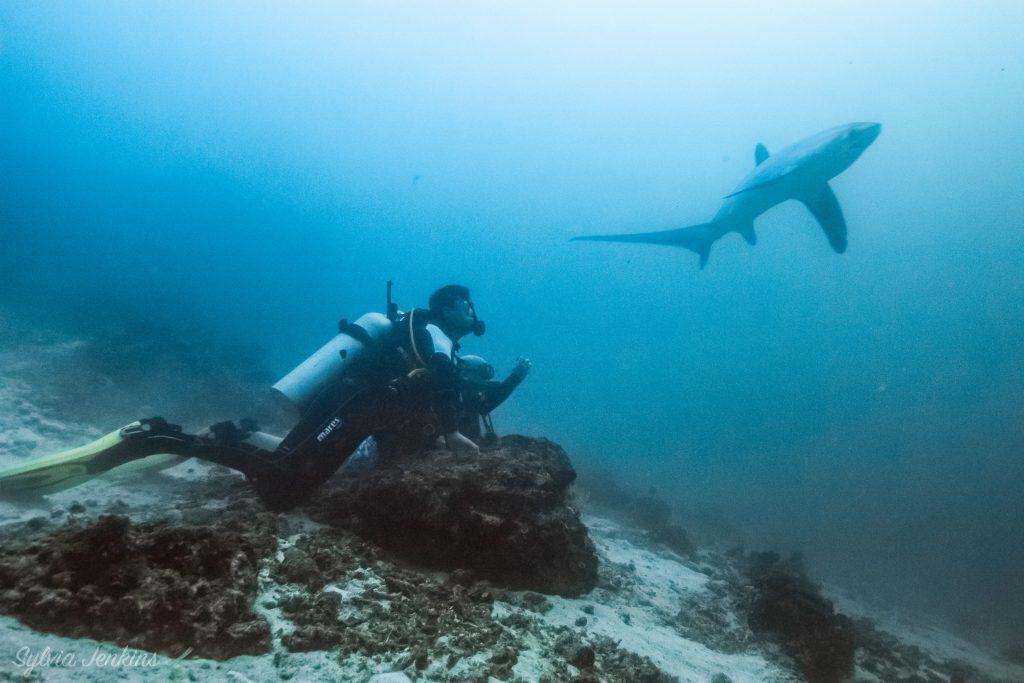 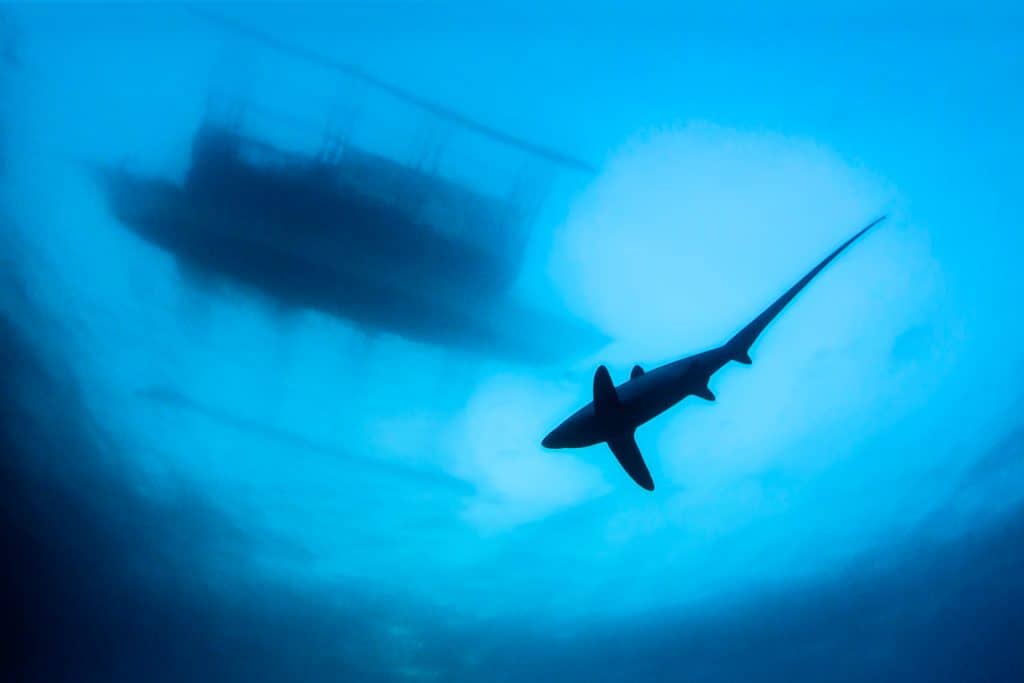 The Thresher Shark Divers team has tried to find the best time to dive with thresher sharks by extensive trial and error and a lot of experimentation. Our divemasters and instructors collect daily information on shark sightings and we record these details.

So far, we have found that the best time to dive with the sharks is anywhere between sunrise and 9am, but usually we go early. During this time period you have a good chance of seeing a shark, but as with most diving there is also an element of luck.

There are all kinds of superstitions as to what will help you see a shark. One of these is that the first boat at the dive site will get the best sightings. We have found this to be false.

To minimize diver impact on the site and to maximize every diver’s chance of seeing a shark, the Dive Shop Association of Malapascua, spearheaded by TSD, decided on a protocol for diving with the sharks that will be followed by everyone. When this was implemented, sightings increased dramatically.

If any of our customers wish to go at a later time this can also be arranged.

TSD offers a unique Thresher Shark Diver Specialty course sanctioned by PADI. You will learn a lot about thresher sharks and about sharks in general, and the Monad Shoal dive will never be the same again!

To get a good idea of the course – long time TSD customer, Steve Tapply, has done many thresher shark dives on various trips to us since 2007. In 2014 he finally decided to take the course and it transformed his dives at Monad Shoal.

Find out more from his blog entry. 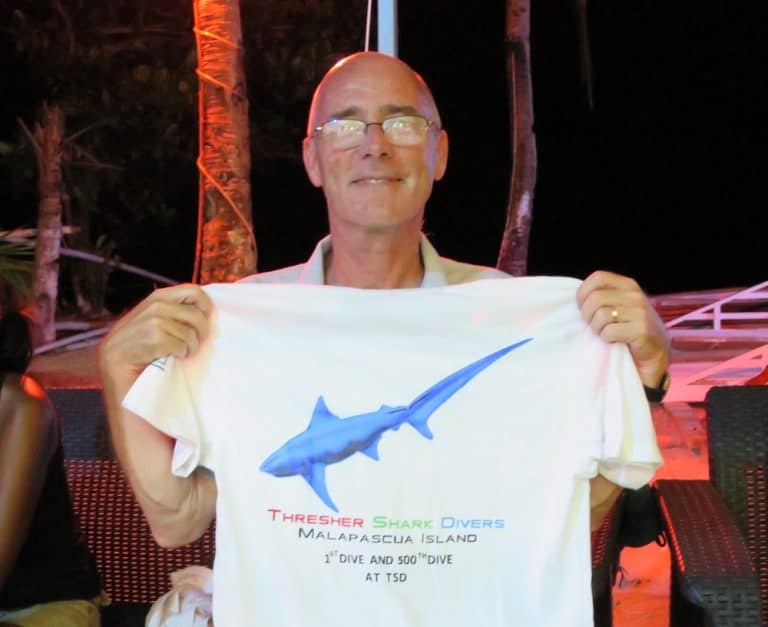 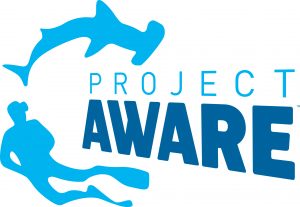 At the end of this course we encourage a donation to Project Aware, PADI’s non-profit conservation group, to aid shark conservation.

You will receive a special Project Aware PADI certification card with Project AWARE’s current sponsore shark on the front.

You can read more on PADI’s Project Aware Initiatives HERE.

What else can you see on the shark dive?

Sharks are not the only ones to benefit from the cleaning stations. The wrasse also attract other pelagics. Large rays are often seen. Schools of devil rays have been more prolific this year than ever before.

Other species of shark can be seen such as hammerhead sharks, grey reef sharks and whitetip sharks. January-April is especially good for hammerheads. The shoal is home to a huge diversity of species: it is a great dive by itself – batfish, flutemouths, barracuda, tuna, mantis shrimp, pipefish, scorpionfish, free-swimming lionfish, moorish idols, schooling bannerfish, unicornfish, squid, octopus and various moray eels. You will often see these fish being cleaned as well and because they stay so still and are so preoccupied it is a great chance to observe them up close.

More info on thresher sharks from The Shark Side of Life.

And find out more about diving with the thresher sharks from a customer’s perspective in her blog entry! 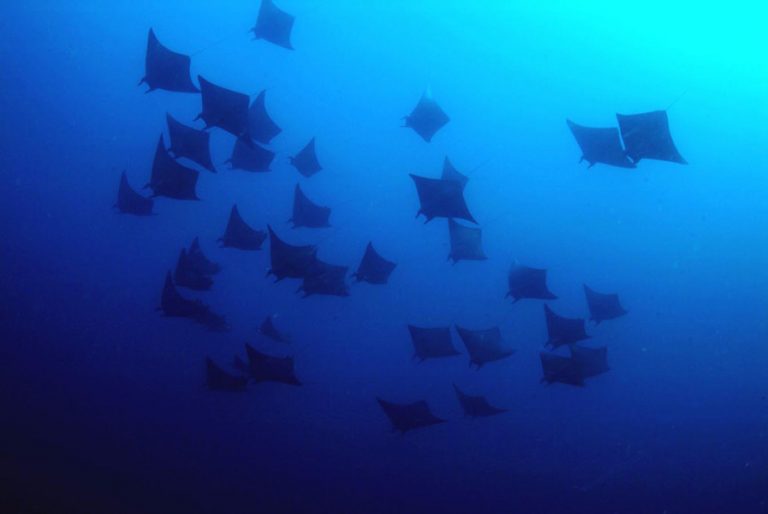 When is the best month? 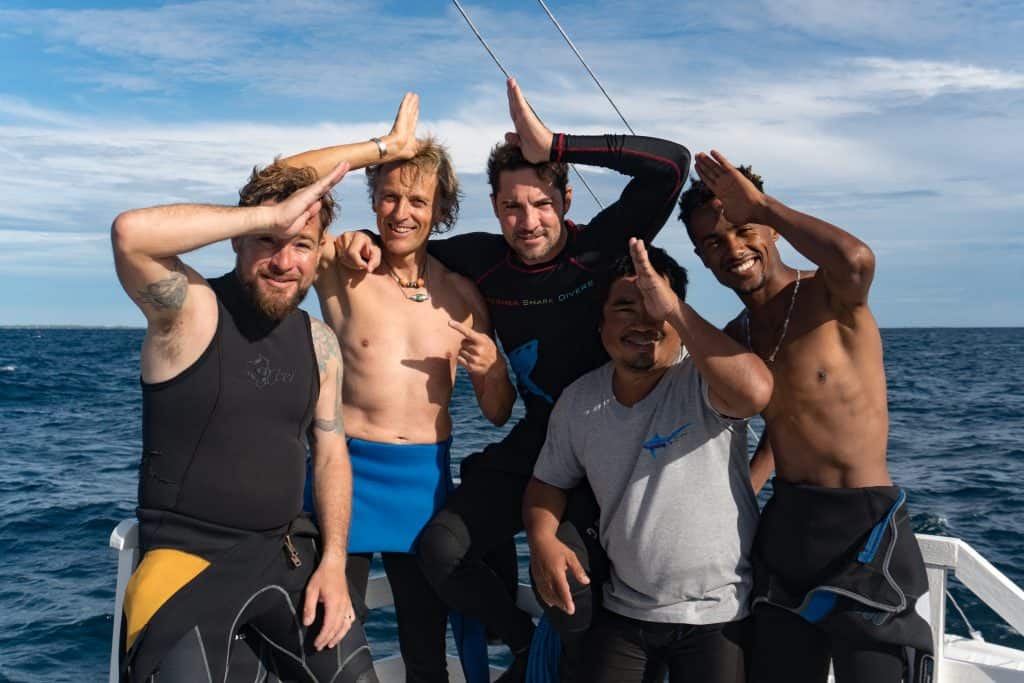 We see thresher sharks year round. On any day, sharks are always spotted at the site, although occasionally a group will have bad luck and not be in the same place the sharks are.

Basically, any time is a good time!

Back To The Top